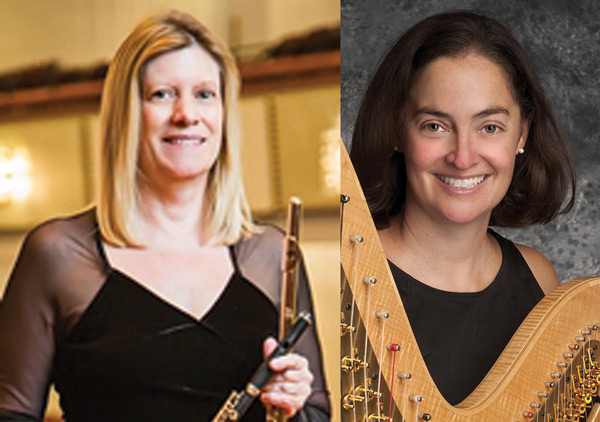 Astor Piazzola
History of a Tango;   Bordel;   Café and Nightclub

Flutist Carole Bean, a native of Columbus, Ohio, attended Bowling Green State University and Northwestern University, where she studied with Judith Bentley and Walfrid Kujala, respectively. She was principal flute in several orchestras in Mexico, including the Orquesta Sinfonica de Xalapa in Xalapa, Veracruz. Ms. Bean also was a flutist with the Honolulu Symphony and Chamber Music Hawaii. On the East Coast, she served as principal flute with the Harrisburg Symphony, and played with the Baltimore Opera and was an extra with the Baltimore Symphony before coming to the National Symphony in 1990. In the Washington area, she also appears with the Contemporary Music Forum, the Fessenden Ensemble, and the Eclipse Chamber Orchestra. She is also a participant in the Grand Teton Music Festival in Jackson, Wyoming.

Michelle Myers Lundy is a professional harpist who performs throughout the Washington, DC area. She has performed at the Kennedy Center, Strathmore Hall and Mansion, the Capitol, Supreme Court, National Archives, Lyceum Museum, Alden Theatre and several of the Smithsonian Museums. Ms. Lundy is currently principal harpist with the McLean Orchestra, Arlington Philharmonic and the New Orchestra of Washington. She has subbed with the National Philharmonic, Amadeus Orchestra and Maryland Symphony Orchestra.  She has been a featured soloist with the Mclean Symphony.  She also performs frequently as a soloist with different choruses throughout the Washington, D.C. area and regularly works with the Thomas Circle Singers.

Ms. Lundy is a founding member of the Beau Soir Ensemble (BSE), a flute and harp duo formed in 2007.  In the summer of 2008, the duo recorded “Debut” and in the fall of 2009, recorded their second CD “Intermezzo.” The duo also recorded an hour long nationally and internationally aired broadcast for the “Hope Network” in the winter of 2008.   In 2011, the ensemble added a violist to bring forth a more contemporary and diverse repertoire. Since then, Beau Soir Ensemble has had the honor to premiere music written for the Trio in the Washington D.C. area.

Ms. Lundy began her musical studies in St. Louis on piano at the age of six. She spent five summers at National Music Camp in Interlochen, Michigan, where she began her harp studies. She received her Bachelor in Music degree from Northwestern University in harp performance. While at Northwestern she was a member of the Civic Orchestra of Chicago. Ms. Lundy continued her studies at the University of Michigan in Ann Arbor where she received a Master in Music degree.